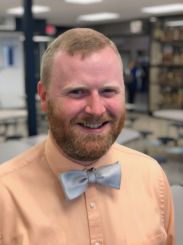 Ben Koch has been Director of Bands at O’Gorman High School since 2014, where he conducts 2 concert bands, 2 jazz bands, jazz combo, pep band, marching band, brass choir, and the musical theatre pit orchestra. A native of Sioux Falls, Ben graduated from O’Gorman in 2004 and went on to receive undergraduate and masters degrees in music from the University of Nebraska-Lincoln. He is currently serving as a member of the Region II Music board and has previously served as the AA band representative on the SDHSAA Music Advisory Committee. Ben enjoys playing horn with the Sioux Falls Municipal Band and has also performed with the Sioux City Symphony Orchestra and the South Dakota Symphony Orchestra. He is a regular pianist/organist for Sunday Mass at his home parish in Sioux Falls.